Most of my more or less distant ancestors that emigrated went to the US. I have spent quite some time digging into on-line American genealogy resources so I find when its says America in the Moving to-column in the Swedish church books rather exciting.

Also, some of them went to Denmark. Not too bad but I haven’t really had the time to dig that much in the Danish archives. But when it says Germany I feel it might just as well said “the moon” and I quickly turn around and away from that brick wall.

That is way I rolled my eyes when my 26-year old Carolina Blomgren with her six-month baby-girl born out of wedlock Anna Mathilda went to Brandenburg, Germany in 1880. That was the last thing I would see about them I thought.

But then suddenly, weeks later, the leaves began to shake at ancestry.com, record hint about Anna Mathilda. And it was a match. 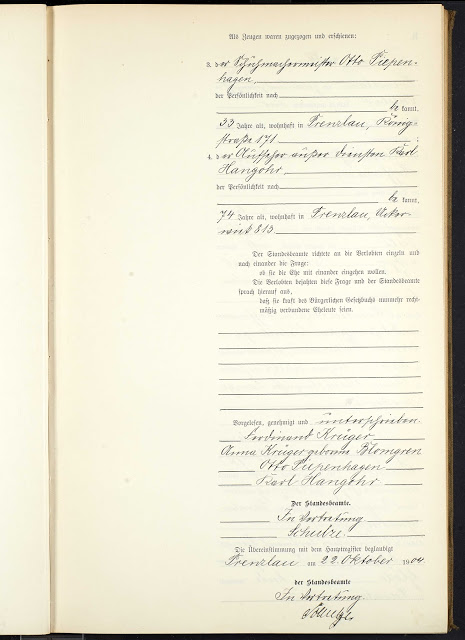 Suddenly I find some more matching records. Ferdinand dies in December 1916 and Anna Mathilda married Johan August Max Lasser on May 2 in 1919.

I notice that in some records Blomgren is spelled Blumgrenn and that generates even more records. Carolina had a son, Wilhelm Ernst Hangohr in 1884. And he got married in Berlin 1909 to Johanna Ernestine.

Thanks to that first marriage record, my German immigrants doesn’t feel like such a big brick wall anymore.