Among photos, there is this old black and white photo of a mystery tombstone. Nels P Benson, 1849 – 1920. No idea who he was, location of the stone (guessing USA) or who took the picture.

So, did a search on Findagrave.com and that was a really lucky one. In the hitlist, there he was, Nels P Benson and a more recently photo of the stone, from 2005. No doubts, it is the same stone. It is from another angle and more of a close-up but you can still see the ornaments in the upper corners. Time to do a little of the genealogy-happy-dance.

The stone is at the High View Cemetery in Ione, Morrow, Oregon in USA. Location of stone – check! Also on the Find A Grave memorial page of Nels P Benson someone has added a death certificate containing an exact birth, March 20, 1849 in Sweden and death date, February 24, 1920. He was a widower and retired. He had been in Ione for 27 years. His fathers name was Bengt Andersson, born in Sweden, name of mother unknown.

With the information from the death certificate I found him in the 1920 US census on Ancestry.com. I did a cut&paste here: N P Benson, widower, 70 years old. Came to the US in 1871 and was naturalized in 1882.

I did a lookup on the EMIBAS-CD, looking for persons called Nils, born on March 20 in 1849. Two Nils matched but none of them seemed to be the Nels I was looking for.

Since I figured Nils would be from the Skåne-area in Sweden I did a search on the free online database, Demographical Database for Southern Sweden, ddss.nu. My trick is to search on birthdate only at first, and you have to type it in the format 1849-03-20. If you get to many matches I try a new search with the name of the child.

Not to many matches this time, and a nice one that seems to match, a Nils Petter with a father, Bengt Andersson (as it said in the death certificate) in the parish of Grevie which really makes sense to me and my research and where a photo of a tombstone would “fit in”. 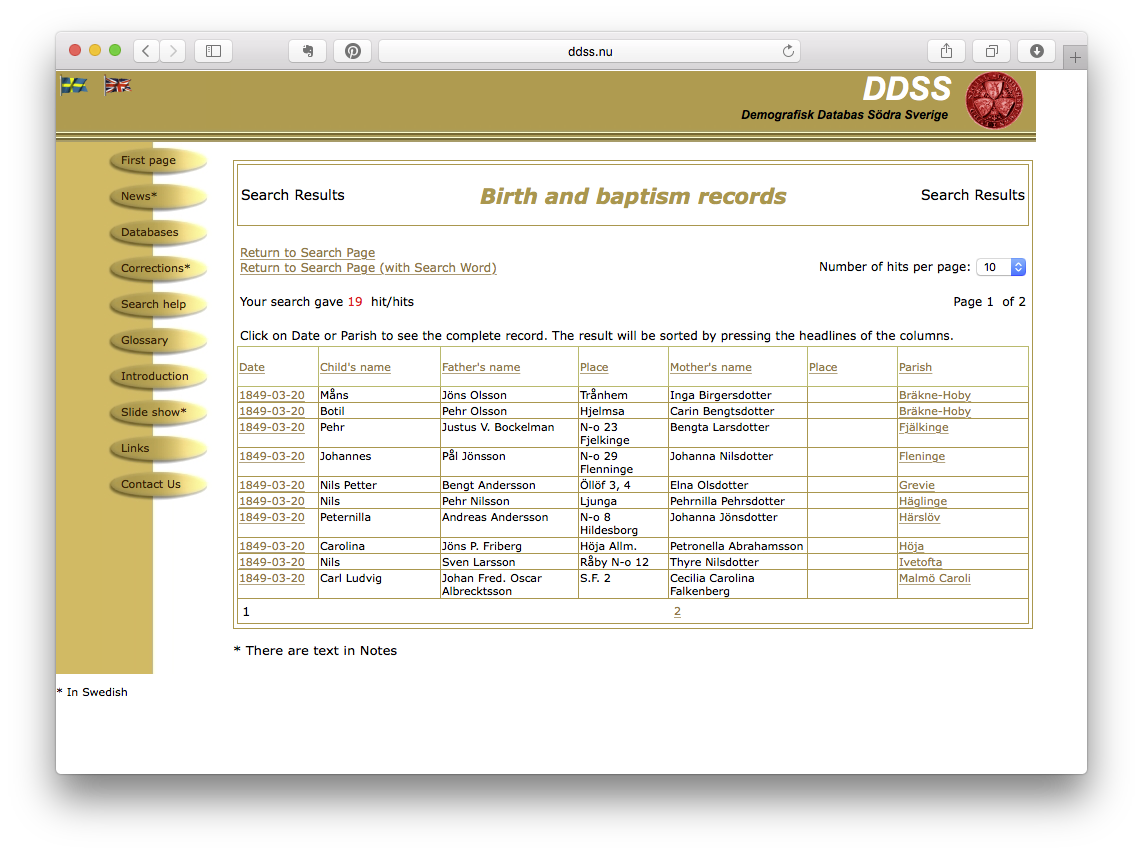 Without a match in this database I would have had a hard time finding this Nils Petter. DDSS is a great help. Locking at the record you get the information and source to the original church book. 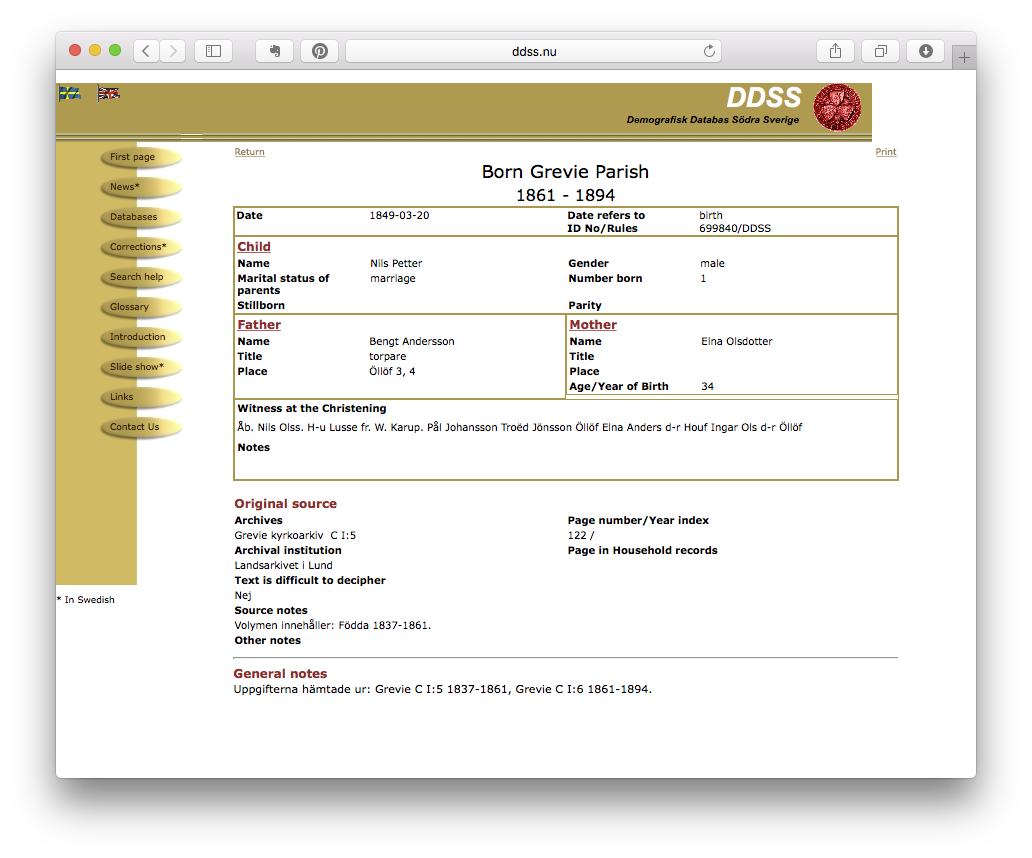 So, Nils Petter is born in Grevie, to Bengt Andersson and Elna Omsdotter. They live at a place called Öllof 3,4. It is also nice to have the text transcribed, especially since it could be a little tricky to read at times.

My next step was ArkivDigital (payed perscription site) to look at the original document in the Grevie CI:5 book. Here he is, born March 20 in 1849.

While following the family, Nils Petter and his parents Bengt Andersson and Elna Olsdotter I noticed he had an older sister, Johanna and an older brother Jöns. He also had three younger sisters and a younger brother. Sadly, in 1856, the brother Andreas died only a couple if weeks old. One year later, Petronella died, 3 years old in June 1857. In September the same year, Bengt and Elna have another daughter, named Peternilla, but she dies as well, 3 months old. In 1861 mother Elna dies and the next year, Bengt marries Boel Olsdotter.

June in 1868 the brother Jöns Bengtsson dies, in the Caribbean. He was a sailor and the priest in Grevie got a letter about Jöns death in December.

Then, in 1871, Nils Petter emigrates to America so it seems very likely that this Nils Petter Bengtsson is the same as N P Benson. Well, notice one interesting thing on this page. Nils is on line 10, but look at his birth date, it doesn’t match. Look at the person beneath him, Elna. It says she is the one born on March 20 in 1849.

Looking at the previous church book Elna and Nils have correct birth dates, so the mix up happens when moving them to the next book. This happens every now and then.

Without the help from the nice people who uploaded the photo and death certificate to Find A Grave I never would have found this out, well perhaps, but not as easy (and it wasn’t even that easy). I am also thankful to ddss.nu, which is such a great resource when doing research in the south of Sweden.

Now all I need to do is find out if Nils Petter Bengtsson is related, a friend or perhaps a neighbor. Also, need to see if I can find any details about the death of Jöns Bengtsson in the Caribbean. One solved question creates at least two new ones right?

Take care, over and out