What is more satisfying than when you find the right key to the lock and are able to open the treasure chest filled wonderful items? Well, figuratively speaking. I am talking about names. I have spent many hours searching for my ancestors finding nothing, and then suddenly, with the right name, there they are. One of the first was my great granduncles-and aunts who emigrated to the US. I was looking for Nelson, Neilson, Svenson, Swanson, Richard, Holmer, Holmberg – you name it. Until I at Minnesota Historical Society found one death certificate with the name Richardson on it. Richardson was the key to get more information, census records, death certificates, muster rolls, obituaries and finding out one of them was in the Spanish-American war. And finding living relatives in the US.

I got a new key a couple of months ago. This time it was about my great grand uncle Volodja Verno, born 1900 in Pskov, Russia. I have known fairly much about uncle Volodja and I have some nice, identified pictures of him.  When you know who is on the picture, perhaps you don’t spend much time trying to figure out what that thing that is written on the photo really means. Especially if it is written a foreign language like Russian in cyrillic handwriting. I just assumed his full name to be Vladimir.

Couple months ago, I got help with translating the text:

“To my dear niece Lucie. Uncle Volodja. Nömme 1932”. The niece is my grandmother. The other photo that, besides that is is a really nice picture, doesn’t seem to have more information than a name, which probably would be Volodjas.

Well, not Vladimir or Volodja, but Voldemar Verno. I didn’t realize it at once, but after spending some time searching I understood finding out his name was Voldemar was not just like having access to a key, but close to having a master key.

I found a database on-line I didn’t have knowledge of, Estonian Biographic Index, http://www.nimed.ee. Sure, I did spend a couple of euros buying points to see the records, but it was so worth it. And after a while a also noticed the record I was paying for, was free to look at in the main database but the convenience of only needing to search at one place is nice. Especially since those findings tend to show themselves late at night right when you were thinking of going to sleep.

So, besides finding out on what cemetery uncle Volodja is buried (and a map exactly where at the cemetery) I found out the date when his wife died. I found in interesting document in Estonian with his name on it. 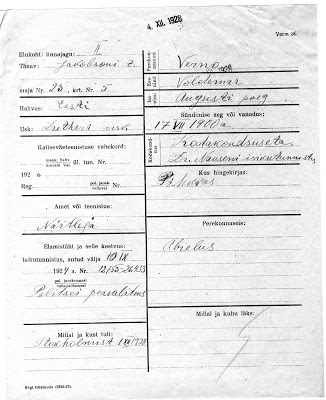 I found out he got divorced from a woman named Linda Rosalie in 1931.

Now, this was all about Volodja but it didnt end with that. I found similar documents about other of my Verno line and also on my Seck line. Those documents I wouldn’t have found (at this point) unless I had not got knowledge on his name.

Uncle Voloja, born in 1900. In 1925 he married Linda from who he divorced in 1931. He was one of the sponsors when my grandmother was christened in Tallinn, Estionia 1922. As you can see in the nice pictures he was into theatre and dancing. He later married Alice Cernova, or as I have found out, also called/spelled Aleksandra Tschernova who was a dancing teacher.

When I was in Estonia and Tallinn last summer, I went to the cemetery to look for his grave and I found it.