Ofcourse it made me curious, it has no dates so, when were they born and when did they die? Did they die on the same day, in an accident or what happend to them? 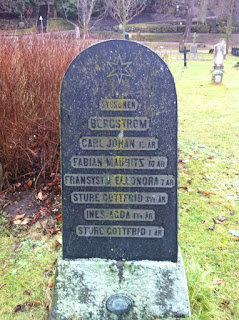 Instead of only writing what I found out, Im going to try to show in step-by-step how I did to find out more information about the Bergström siblings.

1) Since the stone is in Helsingborg, I assume the lived in the Helsingborg area. So, there first place I look to find information is the free ddss.nu webpage. It is a searchable database with churchrecords about birth, marriage and death and covers parishes of Skåne, Blekinge and Halland. Check out the webpage to see exactly what parishes that are covered.

At ddss.nu I choose the database with death and burial records. I pick Fabian to start with and I type that into the deceased first name. I also put in Bergström as the last name of relative. Why? Well, since this is a child that has died usually the fathers name is mentioned. If I don’t get any hits I would try with Fabian Mauritz and skip the relative.

To take a closer look, click on it. As we can see, there is no last name listed on Fabian so doing a search of Fabian Bergström would have given 0 hits. Fabian Mauritz was 9 years, 10 months and 2 days. His father Bernhard Mauritz Bergström seems to be an inn-keeper. Cause of death is diphtheria. 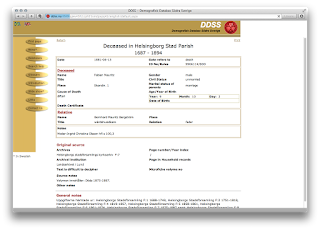 What is important is the sources. This record is found in Helsinborg Stadsförsamling F:7. In this case there is also a note telling the mothers name, Ingrid Christina Olsson and also a page number of the household records 100,3.

2) So, lets check the original source and lets start with the death book. I use a combination of ArkivDigital, Ancestry.com/Genline and SVAR (all are paysites) and in this case I use ArkivDigital. I search for Helsingborg and in the search results I click on Helsingborgs Stadsförsamling. 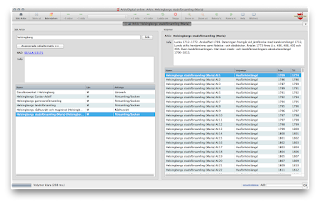 Turing a couple of more pages, I reach June 13 and find Fabian Mauritz.

That means we have found three of the six siblings. These three died in within 24 days, all from diphtheria.

3) Next thing I would do before moving on to the other three siblings would be to look at the household record since I know the page number. It was page 100,3 and I should look at a book covering 1881. I notice there are seven books covering 1880 – 1884 so I am greatful about the little number 3 and dig into book III page 100.

There is the family. Bernard Mauritz, his wife Ingrid Christina and six children where three has thier date of death written to the right. The other children, Anna Maria, Hertha Wilhelmina and Gerda Christina are not any of the other names of the stone so I need to keep looking. Far to the right there is a note that the family has moved in 1881 to 4 Pål.

I pretty much so the same steps over again. I go to ddss.nu, look for Inez in the name of the deceased and Bergström in relative last name. 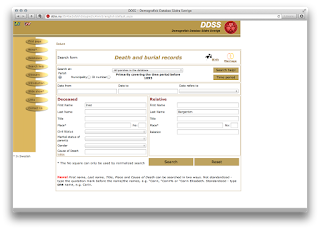 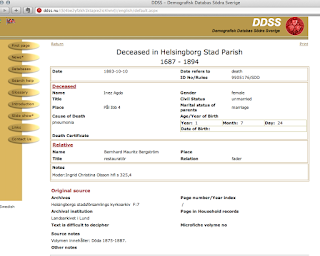 This time to find the family in the household record it would be in the fourth book and page 325 of the book covering 1883.

Four of the six siblings are now found. 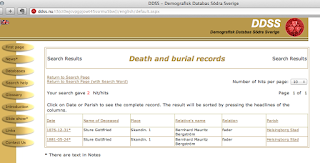 Looking at the record I understand that the names on the stone doesn’t seem to be in order on when the children died but in order of how old they were when they died. The Sture Gottfried I found now was born and died before the other siblings but his name is the last one on the stone. 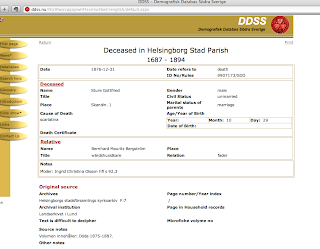 So, almost going to the beginning of the same death book I have been looking in, I find Sture Gottfrid. He dies on New Years Eve of 1876 from scarlet fever.

According to the helpful note, I need to check page 92 in the third book covering the year of 1876. There is the family listed and now five of the six siblings on the stone are found.

Now I need to find the boy named Carl Johan who died at the age of 15. In the household records above which covers the family from 1876 to 1883 I haven’t seen the name Carl Johan. According to those books it looks like Bernhard Mauritz and his wife Ingrid Christina got married in 1866. If Carl Johan would have been thier first child born after thier marriage he should have been listed with the family in 1876 above (assuming he was living with his family at the age of 9-10 years which ofcourse we can’t be sure of). It might also be that he was born in 1883 after the family moved and after Inez died. Then he would have died in 1898.

Searching on ddss.nu gives me no relevant hits. I did a couple of searches on the Swedish Census CDs of 1880, 1890 and 1900, finding the family but no son named Carl Johan. But I notice that in 1884 they get a daughter, Inez Theresia and in 1886 a daughter, Ebba.

Looking at the records above I know Mauritz and Ingrid came from Kvistofta in 1866. I take a chance and do a search on ddss.nu in the married records database for the couple. 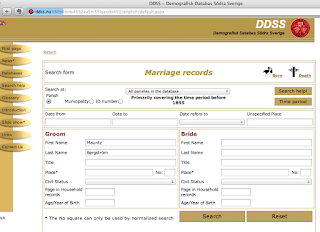 One hit and they should be on page 14 in the household records in Kvistofta parish. 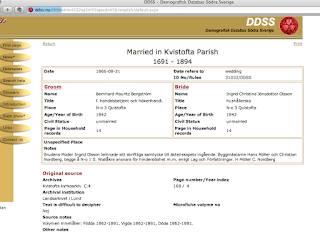 I find the couple but that doesnt give any more clues about Carl Johan. Looking at the birth book for Hertha Wilhelmina in 1876 it says she is the fifth child of Ingrid. That is interesting. When Ebba is born in 1886 it says she is child number 12.

Looking into the records I have found 10 children. If Ebba is child number twelve and Hertha is number five there are two childern missing in the list below. My guess is they were born between 1866-1868 or maybe out of wedlock.

No luck with Carl Johan sofar. My next strategy would be to follow Ingrid Christina from her birth until she married Mauritz Bernhard. I will look into that someother time and with that, I will put Carl Johan Bergström away for a while and be happy with the dates I have found out about the other five siblings: